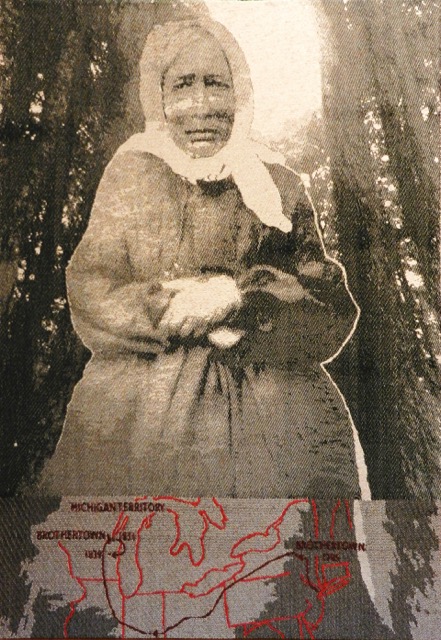 The third weaving is of Polly DeGroat, a woman many Brothertown Indians trace their lineage to, though the photo used for her weaving describes her as a Munsee-Delaware Indian. For Polly’s weaving, Mary started with a washed-out photograph of her and redrew the image, placing her within a forest with sunlight streaming down on her. Mary tried to make her a little more ethereal, as if she had less substance and more sky within her. Because the Brothertown faced several removals from the east coast and eventually were located in Wisconsin, Mary also decided to include a map of their removals at the base of the weaving.

The final size is similar to the other pieces – 31” x 42”. The Brothertown Indian Nation is still struggling to get their tribal federal status reestablished, so Polly’s portrait is particularly important and moving.

Polly Moore was known as a medicine woman.

Reblogged this on Breaking down walls and commented:
This is my 5x Great Grandmother. I just stumbled across this today!

She is my 4th,greatgrandmother,I love the photo